I Survived the Aritzia Warehouse Sale 2012

I’m spending the weekend working. It’s totally numbing my brain. I took a break and read some blogs and this post blew my mind. So smart, so thought-provoking but I couldn’t summon up anything intelligent to add as a comment. I was all, “Yeah!” but that was about the extent of it. I wanted to finish my work so I could write up some book reviews but I’m not sure I can manage it. Maybe I can manage a quick note about the Aritzia Warehouse Sale (Aritzia is a local fashion house that is extremely popular here, they have outposts across Canada and one in New York): 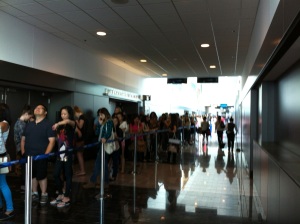 Bad pic taken with my iPhone but you get the idea: this is lineup 4  of 4, you can almost see the promised land from here

I went with a friend so it was fun, but there were four lineups to get through and we estimated that they covered about 1 km length total. We just chatted happily in line as we had no expectations. Well, I thought I had no expectations but it turns out I did:

I was wrong on both counts, silly me, and by the time we had to go I was relieved because I was worried I was going to snap if I saw one more person behave rudely. We commiserated with the staff who were trying to reload racks from all the stuff dumped on the floor. Stuff on the floor would be collected and put into big boxes which were then pushed to the side of the room so that they could be rehung onto racks that could then go back onto the floor. But people were removing clothing from the refilling racks, examining them, then dumping them back onto the ground or into the box, so the half-filled racks would soon be empty again and then the staff would have to reload them for the third time or whatever. If you rehang the same shirt three times within 3 minutes you could get a little tightlipped but these girls were great, just resigned and good-natured about it all. Mind you, it was just midday on the first day of the sale. I shudder thinking of the girls working the last day. Apparently people were lining up at 2am the night before.

I was just amazed by the behaviour. Monkeys at a buffet show more restraint. There were girls with heaps of clothing trying things on round the edges of the room. I would have taken pics because it looked just like a refugee camp but they were literally in their underwear so I didn’t. The changing rooms were communal and there were actual mountains of clothing in them that people were picking through like beggars on the trash heaps of Manila. I heard that if you were not careful with your own clothing in there it could be picked up and taken, especially if it came from Aritzia in the first place.

It reminded me of the time I was in a shoe store and had to take off my big winter socks in order to try on some sandals. I was walking round and looked back to see another customer putting on my socks to try on some boots! It was awful on so many levels. The salesgirl saw too and she and I exchanged looks and giggles. I had to wait until the customer finished trying on about 3 pairs of boots before I could reclaim my socks although by that point I didn’t even want them back. 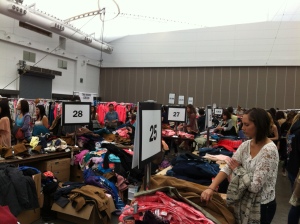 Fashion warehouse sale = bunfight. And this was a quiet area. I don’t know why they had sizes posted, as though jeans in that size would be found beneath the corresponding sign. I found a pair of size 26 jeans under the “31” sign.

Anyway, I got a few tops, some exercise shorts and a pair of jeans for about 1/3 of the regular price just to justify the trip downtown. My friend found a nice wool winter coat but it was missing its belt. We carried that coat around for 30 minutes trying to find the belt (looking on the floor, mostly) and eventually found it in Accessories (cardboard boxes full of stuff) near the exit. So finally she got to try the coat on but it didn’t look right. I was exhausted and unable to specify why it wasn’t right, I could only make that tooth-sucking noise that the Japanese make when they want to yell, “No!” but can’t because Japanese don’t say No. We were saved by another woman who said, bluntly but kindly, “It doesn’t fit. It’s too big and the length is wrong for you,” and I was like, “Yes! That’s it!” and we all had a big laugh and left the coat neatly but wrongly in Accessories because we just had to escape.

We left the employees cheerfully toiling away and the incoming lineup patiently waiting for the perceived retail heaven inside, god love them, and walked outside in the sunshine, with mussed hair and the expressions of those who have escaped unscathed from some epic disaster.

OK, back to work. I usually like to have movies playing in the background while I work at home because I like to hear the dialogue. “Warrior” just finished and I have no idea what happened, chiefly because it’s about brothers fighting each other in UFC. I think. Also there’s no dialogue to speak of. Fight movies make me ill.  Justin recommended it, but now I think it’s because I made him watch Downton Abbey.

EARLY DAYS OF A BETTER NATION