The End of Plagues by John Rhodes

One of my pet peeves is people who don’t vaccinate their kids. Yeah, I said it! Not only is this misguided and misinformed, but actively dangerous to the rest of us. There are people who are immune-compromised, so it’s even more imperative that those of us who can vaccinate do, to protect those very few. If you live in a city, in proximity to other people, it is important to be responsible to your community. If you want to be selfish and irrational, and do exactly what you want when you want to do it, then you should go live in the woods like the Unabomber. It seems that there are definitely people who cherish their notions and will act on them with total disregard for others – until it happens to them. I’ve reblogged a couple of columns by a very good blogger; one is about the dangers inherent in not vaccinating. In one case, a church in Texas promulgated anti-vaccination rhetoric….until their congregation was hit by measles. Then they changed their tune. For some people, that’s always the way. It has to happen to them, then they get it. Tragic.

I think that part of the problem is that there is hardly any living memory of these terrible diseases that we worked so hard to eradicate and immunize against. Anybody remember what a diphtheria epidemic was like? Polio? Smallpox? No. Things of the past, right? Well, they were horrifying enough that people devoted their lives to discovering ways to protect populations from them. Diptheria can kill (these diseases can all kill but diptheria’s mortality rate is 1 in 10 according to the Mayo Clinic website) but if you survive, you’re likely to be crippled, or have heart damage or nerve damage, as in you can’t breathe or swallow. I’d say that’s a pretty serious complication. Ditto polio. Other diseases like measles and scarlet fever can leave you blind and brain-damaged. Still think it’s ok to not vaccinate? Even chicken pox can lead to pneumonia. That’s something that people who think that these diseases aren’t so bad don’t consider. For some reason, the one in a million chance that their child could have an adverse reaction to a vaccine totally outweighs the much higher probability of death resulting from the diseases that these vaccines are meant to prevent. Before vaccinations, these diseases used to sweep through communities, leaving death and disorder in their wake. Winter brought diptheria. Summer brought polio. Look at 10 of the kids at your kid’s school. Picture losing one to diptheria. Picture losing another to whooping cough, and let’s say another two to polio. That’s just out of 10 kids, and that’s just one year. That’s why we developed vaccines, to prevent this kind of tragedy. Still not vivid enough? Here’s a quote about the 1955 polio epidemic in the United States:

“In September, a family living near Milwaukee was devastated by the disease. Four of their eight children were struck down by bulbar polio. In this, the most serious form of polio, the virus invades the cranial nerves that control breathing, swallowing, and speech…The eldest, Paul, was affected first; an athlete of sixteen, he woke up with headache, pain, and weakness in one shoulder. By evening, he could not cough or swallow. In hospital he was placed on a respirator at 6:30 pm; despite all the ministrations of intensive care, he died at 6:50. The next morning his four-year-old sister, Lorraine, woke with a headache and stiff neck and was rushed to hospital. Unlike her big brother, she ate well at suppertime, despite her sore throat, and fell soundly asleep, only to die without waking a few hours later. The day after this, her eight-year-old sister, Mary Ann, complaining of a sore throat and stiff neck, was rushed to hospital. When she began to vomit and had difficulty swallowing, doctors gave oxygen, penicillin, and plasma, and placed her in an iron lung. She continued to answer their questions until 6:15, when she died.

By now the Milwaukee family had lost three of their children, and they were praying hard for the remaining five. But two days later thirteen-year-old Barbara went down with a fever. Her headache was severe, she felt dizzy and nauseous, and in hospital she was fearfully aware of what her symptoms meant. Barbara went through the same intensive treatments as her sisters, but she died at 8 pm.” p. 117

Tragic enough for you? John Rhodes’ nonfiction book, The End of Plagues, is FULL of these stories. It’s a very well-written and concise account of the history of vaccination and immunology. It’s also full of interesting facts which I love, such as that Edward Jenner, who not only came up with the cowpox vaccine, also discovered a plesiosaur fossil. The guy had an interesting life, no? Thomas Jefferson became so passionate about vaccinations that he had his entire family and “staff” immunized, and when the doctor was busy he administered them himself. “By the end of 1801 he had introduced vaccination across Virginia as well as in Philadelphia and Washington, DC…These achievements would be admirable for any scientific investigator, but for a president of the United States they were, and surely must remain, unique.” p. 53

Of course, doctors and scientists such as Jenner and Salk, not to mention health boards, had to deal with people who were frightened of the unknown, and were skeptical of vaccinations. But in those days – Jenner’s first experiment with vaccination was May 14, 1796 – people did sometimes die from complications of the vaccinations. Also, people were not as broadly educated as they are today (you’d think) and of course feared and mistrusted innovation. But people! Hundreds of years have passed. We have education, we have safe vaccines, and even though smallpox has been eradicated, and most of these other diseases are rare in the First World, people still travel and bring back more than postcards with them.

Here’s a good place to insert this fact: VACCINES DON’T CAUSE AUTISM. That crazy theory has been totally disproved. Not to mention: VACCINES DON’T CONTAIN THIOMERSAL (MERCURY DERIVATIVE) AND HAVEN’T SINCE 2003.

Anyway, this book has lots of good information and fascinating history.  I have to finish this off now because it has to go back to the library. I’m going to leave you with a great quote:

“Every friend of humanity must look with pleasure on this discovery, by which one evil more is withdrawn from the condition of man; and must contemplate the possibility, that future improvements and discoveries may still more and more lessen the catalogue of evils. ” Thomas Jefferson, 1800.

And here’s the Mayo Clinic on vaccinations.

Also from scienceblogs.com, an interesting article about the antivaccine movement.

And please do check out this blog, Science-Based Pharmacy. I almost didn’t write this post because he’s got it covered, and he gets credit for finding the scienceblogs post, but I read this book and thought well, why not? There is an excellent chapter on the post World War I flu epidemic that I found interesting as I’m looking at the history of that conflict. (No, I probably won’t blog about that, I’ll spare you.) Overall, it’s a good reminder of what people went through to save us all from the horrific diseases that were the scourge of their time. They succeeded; in fact, they were so successful in controlling and eradicating these diseases that some of us now disregard and actually sometimes vilify the results of their efforts. Isn’t that incredible? 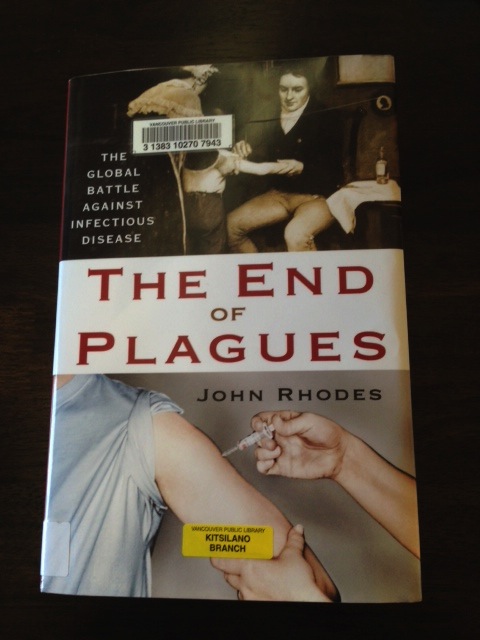 One response to “The End of Plagues by John Rhodes”