Christmas Gifts for the Lifestyle We Don’t Have

Christmas catalogues have begun to pour through the mail slot. Some are for Chapters/Indigo and similar, and the children seize on these and begin making their lists. Some are from companies like J.Crew and I always have a look at these. Not Victoria’s Secret; their Christmas catalogue is meant for members of Cirque du Soleil or similar, nobody else could wear that stuff with a straight face. But some are so far out that they give amusement, so I’m going to share my favourite (so far, it’s early days yet) here.

Atkinson’s is a high-end gift store in Vancouver; it’s where you go to find something for the hostess who has everything. I actually go here to pick up Lampes Bergères, which are basically room fresheners and they make a good gift. The claim is that they “clean” the air which I doubt but they do an efficient job of removing scent from the atmosphere. Excellent for the day after you’ve made a tasty curry.

Anyway, it looks like they have our lifestyle figured out:

This is absolutely my husband at the end of the day. Well, a few small differences: Canucks t-shirts and sweatpants instead of the natty shirt/tie/suspenders, beer instead of Scotch in the Waterford glass. If this dude is watching the hockey game, then there you go. (I think his team’s losing though; even my husband doesn’t generally look this cranky.)  I showed Justin this picture and we-like-to-die-laughing.

A typical place setting at our house: 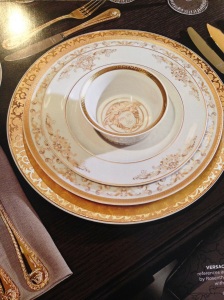 Right? I think it’s Versace. Versace plates. If my kids had to set the table with this stuff the complaining would never end. I don’t think that goes in the dishwasher. I’ll not put those on my wish list, even though they would raise the tone a bit, what with me always forgetting to remove my Ebisu beer apron (from doing an izakaya stage in Tokyo) when we have guests over.

It’s a champagne sabre. Don’t use your regular sabre! Even when I lived an expat lifestyle in Malaysia, where some people (not me) practiced a particularly flossy style of entertaining (coffee mornings featuring special steel Alessi cups for the coffee and fancy china for the tea, for example) I never witnessed someone opening champagne with a sword. Cigar humidors, wine fridges, crystal decanters, yes, champagne sabres, no. Where would you put it? In with the kitchen knives? or do you display it somehow? I’ll never know.

This is the kind of thing I sort of love but I don’t know where I’d put it, nor what I’d put into it. Granola bars? I find that when fruit is left out like this it dries up. Bananas?

This I actually like, and how I got from “this is ridiculous” to “hey I like this” is a process I don’t really understand. But the Atkinson’s people do! I suppose I should be flattered that they sent me their catalogue. They think we live like this! Wow.

Christmas is coming, people. Brace yourselves.