The Headmaster’s Wager by Vincent Lam

I’m so far behind on book reviews….for some reason book reviews are really dominating my blog. At some point soon I’ll try to get back to other topics but for now, here’s another book review: 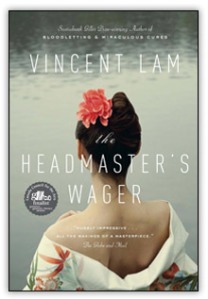 Vincent Lam grabbed everybody’s attention by winning the Scotiabank Giller Prize in 2006 with his book Bloodletting and Miraculous Cures. I was not actually able to get heavily into this book (my fault, clearly), but when I saw The Headmaster’s Wager at the library I picked it up. I found the premise very intriguing and as soon as I started reading knew I was reading something wonderful that was nevertheless going to devastate me. It takes place in Saigon and Cholon during the Vietnam War, so that’s a rather a giveaway.

In 1994, my husband and I moved to Kuala Lumpur, Malaysia for his job. While there I began to read books about the history of the region and became interested in the Chinese Diaspora. There’s a great book called Sons of the Yellow Emperor by Lynn Pan that traces the emigration of millions of Chinese across the globe. I also read about how the Chinese became scapegoats for nationalists in South East Asia in the ’60s. Chinese were victimized wholesale in Malaysia, Indonesia and other countries that were looking for external enemies in their drive for self determination, even though the Chinese had been there for generations and had contributed significantly to those countries’ economies. In Indonesia, Chinese-owned businesses were appropriated, but when the Indonesians had trouble running them, the Chinese were quietly asked back. In Malaysia, the bumiputra laws ensure that every corporation has to have a certain percentage of Malay directors, but when I was there, it was common knowledge that the Malays often sold their seats on the board to Chinese. Racism in Malaysia was institutionalized in the bumiputra laws which were enacted in the 1970s. These laws led to an increase of Malays in the middle class, but marginalized other races such as the Chinese and Indian Malaysians. There was a saying that if you were Malay, you could get into university with a 60% average; if Chinese, you’d need 90%, and if Indian, you’d need to be Einstein. I remember meeting privileged Malay kids at parties and was always disgusted by their attitudes of entitlement, knowing that it was these unfair and unearned advantages that allowed their parents to send them abroad to school and spoil them (not that there aren’t entitled kids everywhere). A lot of Malaysians also had lots of deep-seated insecurities that they masked with arrogance, because at some level they knew what was what. When I was writing for local magazines I got to know the people who were running volunteer organizations and it wasn’t usually the Malays (mind you, there weren’t a lot of Chinese tai tais there either). Most of the volunteers I met were Malaysian Indians who were concerned with social injustice and inequality, and worked hard to alleviate the problems of Malaysian life. Now, I am wildly generalizing here; I also met a brilliant female Malay lawyer who worked for women’s rights. (Now, would she have arrived at that position if she hadn’t had “unfair” advantages? Hmm.) Overall, I found the institutionalized racism detrimental to Malay society and it also lessened my respect for that country’s government. Here in Canada we have laws and programs to give advantages to First Nations communities, but again it’s a racist policy that I’m not sure is achieving its goals. I think these policies infantilize people and unless carefully policed lead to corruption.

Wow, what a rant!

Anyway – in Vincent Lam’s book, it becomes clear that it wasn’t easy to be Chinese in Vietnam in in the 1960s either. The South Vietnamese were becoming nationalistic, and the Viet Cong also targeted “foreigners” on assassination lists. Talk about a rock and a hard place. The issue of half-French children also comes up, as the headmaster, who is quite Chinese-centric and has sent his son to China (not knowing the situation there) to avoid the Vietnamese draft, falls in love with a half-French, half-Vietnamese girl and has a child with her. As it becomes clear that Saigon will fall and as Chinese and foreigners flee the country, the headmaster becomes anxious to send his girlfriend and son out of the country; their foreignness is stamped on their faces. I visited Vietnam in 1997 and remembered reading about the Vietnamese hatred of mixed-race children, so I was mildly worried about showing my half-Japanese self there. I needn’t have; the only remark I had was in the hotel and it was more a compliment than anything else. But after the war, mixed race children were victimized by the Viet Cong. Here in Vancouver, mixed race kids are everywhere and I make a facetious prediction that one day most of the world will look like us. But until very recently, being mixed race, or “Eurasian” was a stigma. Han Suyin, who had a Chinese father and Belgian mother, talks a lot about the difficulty of being half-European and half-Asian in the 1930s, 40s, and 50s. Her excellent autobiographical series (The Crippled Tree, A Mortal Flower, Birdless Summer, My House Has Two Doors, and Phoenix Harvest) contains many incidents that prove this. Because of colonization, there was always a wrong-side-of-the-sheets association with Eurasian children, and even the word “Eurasian” was considered a dirty word by the British of the Raj. So the headmaster’s story spoke personally to me on many levels.

The writing is the kind where even if nothing happens, the sentences flow so beautifully that it’s a pleasure to read them, but lots happens in this novel. I don’t want to give a lot away; I want you to read it. Be prepared to stay up late a few nights and to require some “digesting” time afterwards. It’s worth it.

(If you are interested in Chinese history, Han Suyin’s autobiographical series is hard to beat. My favorites are Birdless Summer and My House Has Two Doors. She really is one of my heroes; if my husband had allowed it, I would have named one of my daughters Suyin. In the 193os, she responded to the misery she saw around her in China, and studied to become a midwife. She adopted an orphan girl and wound up with her diplomatic husband in London, where she left her husband and, supporting her young daughter, studied to become a doctor. So not just a woman, but also half-Asian, and she braved the racism and misogyny of 1930s London to become a doctor! Her independence and strength of character are inspiring. Her experiences in Hong Kong and her love affair with a British photojournalist resulted in her book Love is a Many-Splendoured Thing which made her a household name, especially after the book was made into a movie.)

I’m going to go back to Bloodletting as I’m sure I didn’t try hard enough there. This sometimes happens, especially when I have a huge stack to get through. It took me 3 tries to get into The Girl With the Dragon Tattoo. All that stuff about Mikael’s court case, blah. But it was worth it! So I’m going to get Bloodletting and also Lam’s book about the flu pandemic.